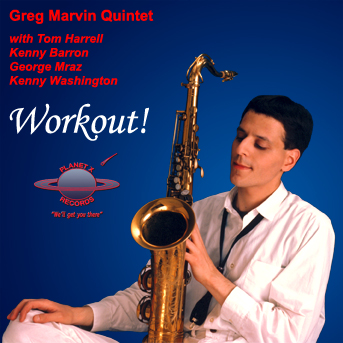 Tenor Saxophonist Greg Marvin established his place in the contemporary pantheon with his critically acclaimed release of last year, I’ll Get By (Hi-Hat 2). I’m happy to report that his follow-up for the Dutch Criss Cross label is a winner as well.

Marvin is a 33-year-old New Yorker whose playing reflects the thoughtfulness of mentors Lennie Tristano and Warne Marsh, as well as swinging lyricists like Lester Young and Sonny Rollins. With virtuosic bop-based chops and a warm singing tone reminiscent of Marsh, Marvin is a uniquely compelling stylist, visceral as well as cerebral.

In tribute to Marsh, the late tenor sax innovator, Marvin offers a poignant reworking of the changes of Out of Nowhere called Gentle Giant. “Warne’s was a great spirit,” Marvin notes in the liners. “He brought a beautiful sound and feeling to music; something wholly his own.” So, too, I might add, does Marvin.

The interactions between Marvin and his front-line foil, Tom Harrell, are all hand-in-glove. In Lee Konitz’s acrobatic Subconscious- Lee, tightly choreographed sallies explode everywhere. As for Barron, Mraz and Washington, well, what can one say about perfection?
Marvin again impresses with long sinuous lines, his use of the entire range of the tenor, and an ever-probing approach which together spell sound-of-surprise Jazz at its neo-mainstream best!

Tenor saxophonist Greg Marvin is one of a growing army of highly talented, determined and resourceful young musicians who are concerned that their music should be properly presented. Greg’s first two albums were issued on his own Hi-Hat label and they reflected careful preparation and attention to detail. As a result, both were very well received by the Jazz critics.

The leader demonstrated his good taste not only in his own fluent solos, but also in his choice of personnel-pianists Hank Jones and Susan Chen, Bassist George Mraz and drummers Billy Higgins, Mel Lewis and Akira Tana.

The same concern for detail is again evident in the enclosed album, Greg’s first european release, and the debut of a quintessential quintet. With remarkable confidence and aplomb, Greg stepped out as the only horn on the earlier Lp’s, and this time he is partnered by the very gifted trumpeter-flugelhorn player Tom Harrell, a young veteran of many bands, notably those of Horace Silver and Phil Woods.

Harrell, pianist Kenny Barron, George Mraz and drummer Kenny Washington were all hand-picked by Greg whose musical taste is clearly very close to that of Criss-Cross producer Gerry Teekens who has recorded all of them previously. Tom Harrell has his own album, Moon Alley, (Criss 1018) while Kenny Barron can be heard at the helm of his own trio on Green Chimneys (Criss 1008). George Mraz is featured on Warne Marsh’s Star Highs (Criss 1002), Jimmy Raney’s Wistaria (Criss 1019), and Jimmy Knepper’s Dream dancing (Criss 1024). Kenny Washington’s superbly supportive drumming may be found with Hod O’Brien on Opalescence (Criss 1012)(also featuring Harrell) and Presenting Michael Weiss (Criss 1022).

The five work in close accord and the empathy between them is readily apparent throughout this satisfying set. Because Greg Marvin is perhaps not so familiar to European listeners-a situation which will be rapidly remedied by this release-some biographical backgrround is necessary.

He was born in New York in 1956 and his first instrument, at the age of nine, was the guitar. He started on saxophone at 17, initially the soprano but finally the tenor. Greg also had spells with alto and C-melody saxophones during his formative years. This familiarity with four members of the sax family gave him useful appreciation of range and the differing characteristics of the straight and curved horns.

It was the tenor, though that really made Greg ‘sing’ and it has been his key for exploration and development since 1975. He spent the early 1980’s in Seattle where he got through some invaluable playing experiences. He also spent periods studying with two excellent teachers, Lennie Tristano and Warne Marsh, both sadly gone now. Yet even more instructive were the many occasions he listened to Marsh play. Thankfully, Greg Marvin does not come out of any easily categorized mould. he admires Lester Young, Charlie Parker, Sonny Rollins, and Warne Marsh but has avoided the trap of getting stuck on anothere man’s style. Hence his markedly individual tone and personal rythmic sense, and in his solos a distinctive perception of structure is easily discerned.

He comes to us on this recording, a mature and fully formed stylist in his own right, and that is much harder for anyone of his generation to achieve. There are no real big bands to learn in anymore, clubs are reluctant to hire young Jazz talent so the mysteries of Jazz become more difficult to unravel.

Greg has shown he can function creatively with players of varying styles and eras, but in WORKOUT! he commands a genuinely exciting band who are all on the same wavelength. Greg’s respect for the Jazz tradition is revealed by his choice of classics from the repertoire-Lester Young’s Dickies Dream, Lee Konitz’ Subconscious-Lee- and ever-meaningful standard melodies, Everything I have is yours and Lover Man.

In his own compositions, Greg shows an understanding of Charlie Parker’s blues feel (Zip) and an appreciation for the life of Warne Marsh with the dedication to Gentle Giant. Of Marsh, Greg says: “Warne’s was a great spirit. He brought a beautiful sound and feeling to music; something wholly his own.”

This surging set opens with Greg’s boppish blues, well named for it’s Zip. The leader sculpts eight flowing choruses before giving way to five by Mraz and six by the warm-sounding Harrell. Barron weighs in with five choruses of melodic piano and drummer Washington ties up the solos before the urgent theme is re-stated.

Burton Lane’s beautiful ballad issensitively explored by these five kindred spirits who collectively and individually pledge Everything I have is yours. The written melody is never actually stated as each man in turn shapes his own song on the fine changes. Greg’s lyricism sets the pretty mood in a full chorus, Barron and Harrell split the next, retaining the gentle atmosphere, and then George shows us why he’s in such great demand with 16 bars of cohesive clarity. Tom and Greg intertwine for 16 and then take us out.

Dickie’s Dream, first recorded by the composer Lester Young nearly fifty years ago, comes up daisy-fresh in Greg’s sparkling version. Pres is recalled, but in feeling rather than in solo content, by Greg over three cohesive choruses. Harrell takes a couple, followed by Barron who shows an affinity fot Tommy Flanagan here. Mraz justifies his two choruses with some splendidly nimble work. Then Greg and Tom top off this superb tribute by their unison delivery of Lester’s 1939 solo, note for note. They dance out on a swing riff. Sheer delight!.

Subconscious-Lee, a fiendishly clever melody by Lee Konitz on the changes of What is this thing called love, elicits a mercurial yet superbly controlled solo from Marvin, displayinng his rythmic agility and ease, especially in the turnarounds. His three choruses are between two apiece by Barron and Harrell. Mraz and Washington indulge in an alert conversation for strings and skins over two choruses of fours. Tenor and trumpet mingle for an unaccompanied chorus of telepathic communication before the crisp ensemble exit.

Lover Man is, quite simply, one of those tunes that constantly refreshes and inspires. The routine here has Greg, Tom and George working their magic for the first half chorus, with the two Kennys joining them for the bridge and melody repeat. The only soloists are actually Barron (half a chorus) and Mraz (half a chorus). Greg and Tom counterpoint their way to the close.

You may not be surprised to discover that Gentle Giant (for Warne Marsh) came from Out of Nowhere. He was certainly somewhere in Jazz. Greg unravels three sagacious and swinging choruses prior to a couple each from Harrell, Barron and Mraz. These were the changes that Warne was playing at the moment of his passing, and one can understand why they have been favored by so many good players and prompted the writing of new lines upon them. Greg and Tom again exibit their exceptional understanding in two choruses of total rapport before negotiating the theme.

And that concludes a splendid Workout! An album that enlarges and enhances the always living and ever growing Jazz tradition, and introduces Greg Marvin on record in Europe. Those of us on the east the Atlantic will be expexctantly wating to hear Greg in person soon. Workout! will whet many appetites for more sounds from this gifted young man. 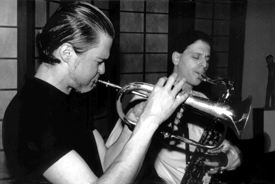 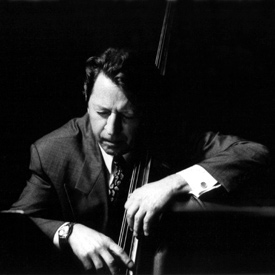 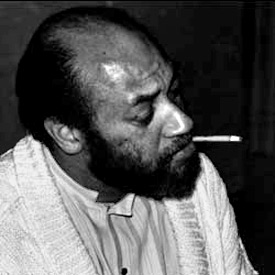 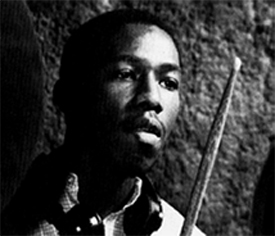